Darksiders Genesis Puts a New Spin on the Series

Sniper Elite and Divinity: Original Sin Get Board Game Versions

Psyonix hand-picked a new set of training packs for Rocket League players to improve their performance and iron out any remaining weaknesses in their driving prowess.

Rocket League has become so popular and accessible that it is being used by lobby groups to show off to politicians. This is the magical ingredient for the long-term success of a game. A game has to be easy to get into, but hard to master. Rocket League achieved such balance — which makes it still engaging and massively popular, even four years after its release.

Although previous training packs in your Rocket League’s Training Browser came from the game’s pros, who best knows how to play the game than its developers?

Check out the refreshed Featured Custom Training packs and elevate your game! They might even help you get to that next Rank before Season 11 ends! Details: https://t.co/XKLNLfttma pic.twitter.com/oP09j1NrNx

Here is the full set of refreshed training packs in your Training Browser: 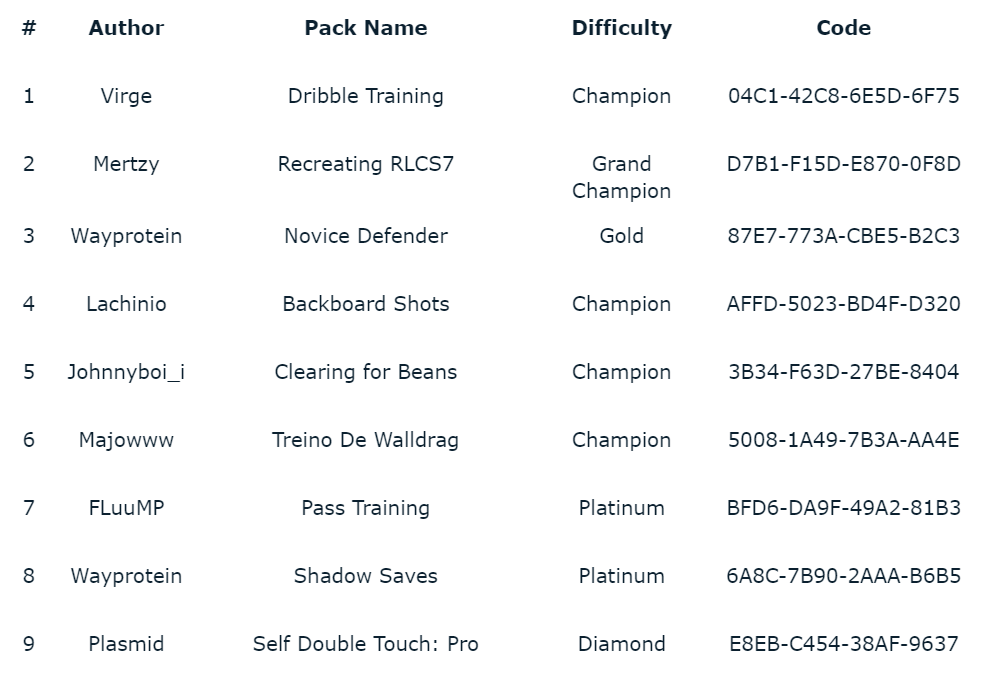 As Season 11 ends on August 27, you still have plenty of time to take advantage of the training packs and improve your ranking. In order to accomplish that, you have to play the matches in your Competitive Playlist and gain the Season Reward Level. Only after successful completion will you be granted the rewards for Competitive Season 11.

Lastly, if you want to get some notoriety and you consider yourself a Rocket League master, you can create your own training pack and submit it to Psyonix. They go through fan-submissions every month — shared on their Twitter, Discord, and Reddit.

What do you think of Rocket League? Do you still play the popular game, even four years after its release? Let us know what you think of Psyonix’ vehicular soccer video game in the comments below!

Freelance writer, VR and cryptocurrency enthusiast. Against totalitarian social control, be it in the form of governments or corporate oligarchs.

We use cookies to understand how you use our site and to improve your experience. This includes personalizing content and advertising. To manage or opt out of the use of cookies click here. By continuing to use this website or closing this banner, you accept our use of first and third-party cookies.I acceptPrivacy policy